I was 16 when the sickness began.  The doctors thought it was a chronic bladder infection.  One to three times a week, every week of every month for 3 and a half years, I was in and out of a doctor's office, lab, pharmacy, or an emergency room.  Until the day I was diagnosed as having a rare bladder disease that doctors knew little about.

It was the day the specialist gave me the bad news and my options.  “It will only get worse and worse, I am so very sorry”, the doctor said. “You have a few options, pain killers for the rest of your life, or one of my nurses can teach you to instill an industrial chemical in your bladder a few times a day that will numb the pain, or we can remove your bladder.  I am so very sorry.  You and your mother should go home and think about it and let me know your decision.”  That was the news he told me.  I was 18 years old.

I went home that day and the pain began to worsen.  I curled up in a ball on my floor and began to pray.  My family was not very religious.  At that point in my life I could only remember going to Catholic Mass when I was 6 on Easter and Christmas, and I had a baptismal certificate from when I was four years old.  My Mother used to tell me that God hears our prayers and he has angels looking over us to protect us.

So there I rocked in my little ball in my little space on this earth and I began to pray, “God let me die so the pain will stop”, over and over and over again.  I can remember the moment right before I passed out as if I heard it now, the voice of an angel.  It said, “don’t be afraid, this too will pass”, and I blacked out.  When I awoke the next morning something was different.   I somehow knew that I knew that I knew one day I would not be sick.  It did not matter what the doctors said or what anyone believed, one day I would be healed.  I stopped going to doctors after that and started researching alternative medicine while I held on to every word the angel had spoken to me.

It was 12 years from when the sickness started until that very day when I was actually healed.  It was my 27th birthday and I had just been told, by the man I was in love with, that he was dumping me for a “Christian girl”.  He said he had just found Christ and I did not know him myself.  My world began to crumble into the rubble of self-pity and anger as I found myself lying on the floor again curled up in a little ball once more.  This time I was angry with God.  “Why did I have to suffer so much pain in my life? Why can’t I be happy? Why can’t I know you God?”  I began to pray again, this time a different prayer, an angry prayer, “Lord, if you are real then prove it!”  I lay on the floor until I heard another voice that said, “Go to church and get baptized”.

I thought I was losing my mind and I tried to get up and forget about what I heard and move on with my life, but the voice would not stop until one Sunday I found myself walking into a church down the street from my house.  That was the first day anyone had ever told me about Christ and that He can heal and take away our pain.  I gave my life to the Lord that day.  The Pastor gave me my first Bible and a book on the first week of being a Christian and I went home and began to read.  A few days later I found myself sitting on my floor getting frustrated that the same story would be written over and over, I thought there must be a misprint in this Bible.  Then I closed my eyes and began to pray and ask God to be real in my life.

In that moment, I saw Christ stand before me.  Everything was dark around me but Him.  He pointed to His right and a pool of water appeared with the moon shining down on it to light it.  I suddenly saw my ex boyfriend walk onto the water like it was glass.  I looked up at Jesus and asked Him what He wanted me to do and He said, “ dance in the light of God.” And He handed me to him and we began to dance.  I began to laugh and suddenly, as loud as thunder, I heard Jesus say to me, “Let Go!”  I got scared, let go and looked down at my feet and began to fall into the water.  Suddenly, Jesus grabbed my hand pulled me up, looked into my eyes and said, “As long as you believe in me, you will never fall.  I promised, this too will pass.”  In that moment I remembered the voice of the angel I heard all those years ago.  It was the same voice.  In that moment, my body was completely healed and Jesus began to dance with me in the moonlight. A moment later, He was gone and I was sitting once again on my floor.

I have been miraculously healed ever since that day.  I can never deny the Miracles, Signs, Wonders, Power, Grace and Love of Christ.  I am a living testimony and I will testify all the days of my life.  That day marked the beginning of my new life, my journey, and intimate encounters with Christ that have followed ever since… 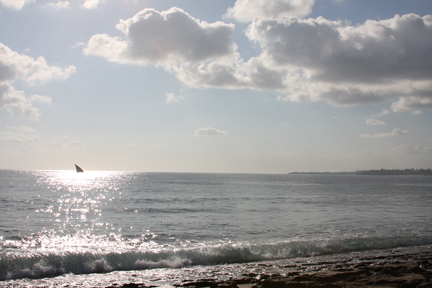